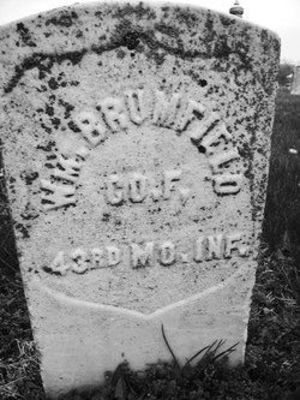 Captain William Afton Brumfield was born August 4, 1827 in Jessamine County, Kentucky, the son of Obediah “Obe” Brumfield [1770-1840] and Margaret Thorton [1794-1834].
He served with the 43rd Missouri Infantry, F Company, Union Army. The 43rd Regiment, Missouri Infantry (Union) was organized at St. Joseph, Mo., August 22 to September 7, 1864. They were attached to District of Northern Missouri, Dept. of Missouri, to April, 1865. District of Central Missouri, to June, 1865. They saw action at Boonville, Mo., October 9 and 12, 1864; Brunswick October 11; Battle of Glasgow October 15, 1864 (6 Cos.). In operation against guerrillas in District of Central Missouri until June, 1865 which included at Little Blue River March 11, 1865 (Detachment); and skirmish Star House, near Lexington, May 4 (Detachment). They were mustered out June 30, 1865. The Regiment lost 11 Enlisted men killed and mortally wounded and 53 Enlisted men by disease. Total 64.
Surviving the war, Captain Brumfield must have thought he was safe. Nothing could be farther from the truth. He was shot and instantly killed between 3 and 4:00 by Solomon Tomlin on May 27, 1868 in Gallatin.
The rumor in town was that a dispute existed between them concerning a recent case of horse stealing, Capt. Brumfield charging Tomlin with the deed and threatening to have him arrested. The feud had been ongoing for quite a while.
According to the Gallatin’s North Missourian, published on July 30, 1868, “On this particular day, a disturbance arose in Stewart’s grocery between a Mr. McCan and Tiffus Fannin, the latter being the brother in law of Tomlin. McCan being struck a time or two and getting the worst of the affray, got out of the grocery and walked up the street to Smoot’s store. In about a minute Fannin followed him and the disturbance was renewed in front of Smoot’s store. Fannin seized a scythe and struck McCan a time or two and then ran him past the middle of the street with thescythe raised for striking.”
During this time, Brumfield was at Alley’s eating oysters but being made aware of the fight, he came out, crossed the street and just as he was entering the east gate to the Square, Fannin entered the south gate for the purpose of giving himself up, many believed. He advanced a few yard, but on seeing Brumfield, he stopped and remarked “I’m afraid of ‘that’ man” and turned around and went back out the same gate by which he had entered. Fannin went by Miller’s store and went in Smoot’s.
Capt. Brumfield kept on walking at a steady pace, passed through the south gate of the Square and went across the street to Smoot’s store, following Fannin. When Capt. Brumfield got nearly opposite Miller’s store but yet a third of the street distant, Tomlin, who was in the store and on the watch for him, advanced to within 4 feet of the door, raised a double barrel shot gun, took aim and fired.” Capt. Brumfield received the whole charge, the principal part at the right breast, and went down immediately and with scarcely a motion. Later 54 wounds were counted.
After the dreadful deed was done, Tomlin ran back through the store, mounted his horse and escaped. Sheriff Ballinger was out in the country collecting the revenue. Deputy Sheriff Hays soon appeared upon the ground and summoned the crowd to assist him in the pursuit, but strange to say, only 2 people responded.
In the Lincoln County Herald, Troy, Missouri, published on August 6, 1868, the following was taken from the Chillicothe Constitution which had been published on July 30. “Capt. Brumfield was well known throughout the Grand River Valley as a desperado and assassin. He had commanded a company of militia during the war, and cherished the most bitter hatred towards all but Radicals, and it is currently reported that quite a number of good citizens were murdered at his hands. He was also concerned in the attempt to break up the Democratic barbecue in this city in 1864. He is the man who, at the religious debate some years ago in Daviess County, murdered in cold blood a young man named Crews, (who was eating his dinner at the time) because of his having been a rebel soldier. Tomlin, by this act has deprived Radicalism of one of its brightest lights, but has rid the earth of a monster.”
Capt. Brumfield married Elizabeth Ann Scott, and he is buried at Old Scotland Cemetery in Jameson. Their children were: Effie, Mary, Sarah, John, James, Dinah, William, Prentess and Thomas.
The war was said to be over, but the resentment remained for many years. Others were killed in Daviess County before and after this incident which, in one way or another, the hatred led back to the Civil War. 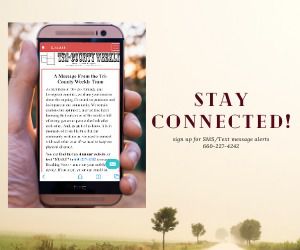